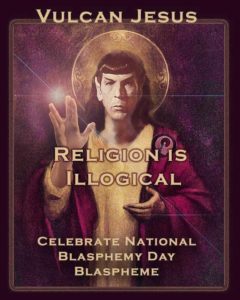 When a caller is looking for religious blasphemy phone sex, the chances they were raised in a strict, religiously conservative household are high. People that were raised atheists and agnostics don’t have any time for fairy tales. They already find it ridiculous, so there’s no need to even discuss it during phone sex conversations. All the people that have called for this were indoctrinated at a young age to buy into this hokum called organized religion. It seems the ultimate is to have sex in a church, the ultimate “take that,” to God, lol.

I’ve talked to a few men that have not only had sex in churches to do this, but rinsed their cum covered hands in the holy water afterwards. So remember that the next time they put the holy water on you, it could be laced with sperm. Some talk about the priests and the nuns getting it on, carrying on with the altar boys, all kinds of madness. One that used to call for religious blasphemy phone sex was an English Vicar, there have been a few ministers as well that called to hear me bad mouth the Lord as they masturbated. One was just a minister in a sexless marriage, but most guys seem to be in those, religious or not. They’d go on about if their congregation ever knew what they were doing, the shame it would bring on them.