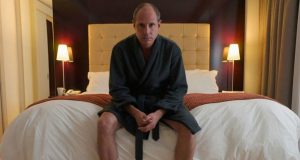 I saw him leisurely laying back on his couch in front of an open picture window, curtains totally opened up and he was on the phone rubbing one out. I’m convinced he was having phone sex with whoever was on the other end of the phone. His floor is at street level, anyone could have walked by on the sidewalk and glanced in. I was across the street and saw. I had binoculars and I looked at him and could see even more close up. I think he knew I was watching, but he didn’t glance up and over at me or anything. I had my blinds drawn and was just poking the ends of the binoculars through and watched him jerk off. He’s not a bad looking guy, truth be told.